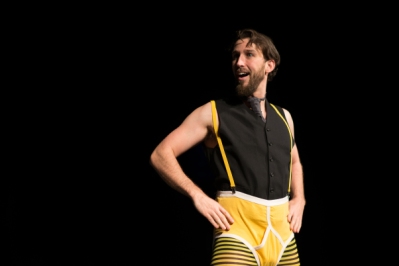 Following Philip’s enthusiastic review of their Romeo & Juliet last night, I’m primed to expect good things from Merely Theatre, with their gender-blind double casting and sprightly interpretations of the Bard. And I’m not disappointed: Twelfth Night is an absolute delight, and an interesting counterpoint to the star-crossed lovers’ tragedy. To those who claim Shakespeare’s comedies just aren’t funny (Sir Richard Eyre, amongst others), I say: watch this. It’s hilarious. Even the too-cool-for-school teenage girls sitting in front of me – with their teacher and ‘response to live performance’ booklets – can’t help but laugh after a while. I mean, they give eye-rolling indifference a decent go, but it proves impossible in the face of Tamara Astor’s foolish musical antics (she’s playing the fool – conflated with Maria – so it all makes perfect sense).

The plot’s too well-known for me to detail it here, and – to some extent – this production relies on that familiarity. I’m never in any doubt as to who is who, but I might be, if I didn’t know the play. Hannah Ellis, for example, plays the drunken sot, Sir Toby Belch, as well as Orsino, but the only difference in costume is the addition of a tweed jacket and a bow-tie to denote Olivia’s wayward uncle, and – although Ellis plays them very differently – I think there’s a danger the Duke might appear to be the same man, albeit sobered up. Still, her performance is undoubtedly excellent, as is Robert Myles’ turn as the unfortunate Malvolio, not so much cross-gartered as high-Y-fronted, and stupidly amusing. Sarah Peachey and Emmy Rose deliver the ‘straight-man’ roles of Olivia and Viola with aplomb; there’s not a single weak link here.

It’s a lively, pacy piece of theatre: deliciously daft, revelling in its silliness. Scott Ellis’s direction is sublime: this show is fast and funny and entertaining all the time. The simple set works extremely well: there’re no unnecessary props or scenery to slow things down. This is seriously good comedy. Do try to catch it if you can.