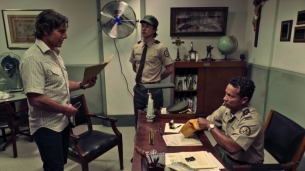 It’s often said that truth is stranger than fiction and the story of Barry Seal could have been created simply to demonstrate that adage. This lively period piece, set against the wilder excesses of the nineteen seventies and eighties, is an enjoyable romp from start to finish.

Despite having a name like a welder from Dagenham, Seal (Tom Cruise) is a pilot for TWA, bored enough to stage episodes of ‘turbulence’ to brighten up his day, a man who makes a little pin money on the side by smuggling boxes of Cuban cigars in his luggage. When he is approached by wily CIA man, Monty Schafer (Domhnall Gleeson), and offered a job flying surveillance missions in war-torn Central America, he jumps at the opportunity. His wife, Lucy (Sarah Wright), isn’t keen on the loss of security, particularly as the couple have a young family and a new baby on the way. But Barry manages to persuade her that everything will be just fine. Convincing people that he is on the level is clearly his strongest suit. He soon discovers that his peculiar talents are in demand beyond the CIA. It isn’t long before he’s involved with the likes of Pablo Escobar, and the Medellin Cartel, flying plane loads of cocaine from Colombia to Louisiana and making obscene amounts of money in the process. Inevitably, he gets caught by the DEA. And that’s when things get really weird…

Doug Liman is always an interesting director and he expertly mines this story for maximum laughs, but it’s probably true to say that only Tom Cruise could make such a mendacious lead character as charming as he does. The way it’s presented here, it’s  not as if Seal is always on the lookout for dirty dealings. It’s just that powerful people can’t stop throwing opportunities in his direction and he doesn’t want to let anybody down. The jaw dropping escapades he lands himself in would beggar belief if this were a work of fiction. But I have to keep reminding myself: this actually happened. Okay, a few liberties have been taken with the odd detail here and there, but a quick Google search tells me that most of it is pretty much on the button. What the film does better than anything else is to reveal the shameful levels of corruption that were taking place within the corridors of power during Ronald Reagan’s ‘War On Drugs’ campaign.

This being a true story, there’s no happy ending for Mr Seal, but even his ultimate destruction is so skilfully handled that you come out of the cinema with a big grin on your face. This is enjoyable film making. Strap yourself in for a bumpy, but highly entertaining ride.