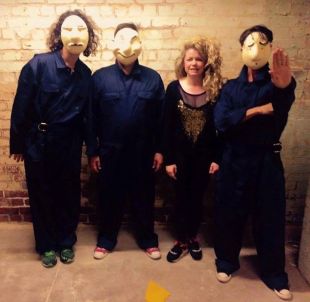 When we enter the venue, three young people in boiler suits are leaping energetically about to music, which is definitely not what I am expecting. Hard Mode, I’ve been told, is all about censorship and surveillance. It imagines a future where the BBC has been purchased by the Chinese and everybody is told exactly what to do and think. Pretty soon, the three dancers disappear but soon return wearing Trestle masks and start to act in a threatening manner. Reay, who is dressed in a leotard, wig and a gold biker jacket (apparently in an attempt to look like Michael Jackson) starts talking, referencing some work she’s done with the artist Ai Weiwei. We are shown a jokey video clip where he is played by a man in a cardboard moustache. Every so often, Reay returns to the other theme of her show, which is her recent breakup with her husband, which seems completely at odds with the other material and too raw for comfort. (She even shows us some video footage from the wedding.)

There’s no denying the enthusiasm and energy that Reay puts into this show, but it’s also painfully apparent that she isn’t really in command up on that stage and Hard Mode feels more like a work-in-progress than something that is ready to show at the Fringe. To be fair to her, others in the small crowd seem to get this a lot more than I do, laughing at her comments, but it really isn’t working for me. The subject of life under an authoritarian regime is undeniably an important one, but it surely deserves something more coherent than this. At one point, the presenters try to impress the horror of living in such a society upon me by making me go and stand in the corner for five minutes.

Which probably says it all. This is neither a biting commentary nor a successful stand-up show. Instead, it exists in an uncertain hinterland somewhere between the two.