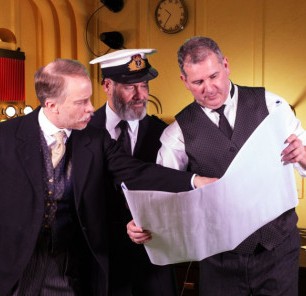 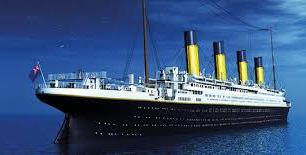 The King’s Theatre has a long and proud tradition of working with amateur companies; but it’s clear from the opening scenes of Southern Light’s production of Titanic, that we’re going to need to redefine the word ‘amateur,’ because this lavishly produced musical is certainly more assured than the term might lead you to expect. Indeed, the overall look and feel of it would give many professional companies a good run for their money.

Of course, we all know – or at least, think we know, the story of the ill-fated White Star liner which struck an iceberg on its maiden voyage in 1912 and sank, resulting in the deaths of over one thousand, five hundred passengers. The story has retained its fascination ever since and little wonder, as it serves as a powerful metaphor for the world’s obsession with the class system and the symbolic end of the British Empire. It has been the inspiration for a whole clutch of novels and films- eerily, it seems, even for a book that was written in 1898, called The Wreck of the Titan, which seemed to predict everything that would happen fourteen years later.

The Southern Light Opera Company’s production fairly bristles with ambition and much like the titular vessel, it’s a colossal undertaking. At one point I counted over seventy performers on stage, moving around in perfectly synchronised choreography, their massed voices soaring in thrilling harmony. A dining room sequence in the first half had three tables full of costumed actors, being served what looked like real food by a battalion of waitresses. (I’d have loved to watch the rehearsals for that!)

As this is so much an ensemble piece, it’s hard to single out individuals for praise, though Chris MacFarlane was very impressive as ‘the Stevedore,’ and Keith Kilgore as the ship’s designer, Thomas Andrews, also shone. Look out too, for a sprightly performance by Judith Walker as would-be social climber, Alice Beane. The musical’s first half, when everyone is optimistic and thrilled with their voyage is by far the most enjoyable. The second half, as we know only too well, heads into darker waters, and at times the sheer impossibility of depicting such a momentous incident onstage threatens to overpower the proceedings -but I did enjoy the moving epilogue where projections of the names of the dead played across the cast as they delivered a final song.

A lot of care and attention to detail has been lavished upon this musical – and the fact that tonight’s performance is dedicated to one of the members of the cast who died just a few days ago, makes it all the more poignant. Don’t let the word ‘amateur’ put you off. This is well worth your attention and it’s on at the King’s Theatre until Saturday the 25th of February.