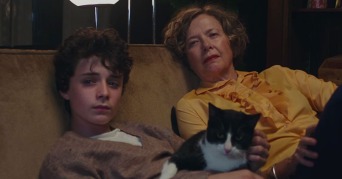 Not so much a film about women as their life-changing influence upon one young man, 20th Century Women has the great misfortune to be released amidst a crop of bigger, more hard-hitting films, which means it isn’t really getting the degree of attention it  deserves. This is a shame as it many ways it’s one of the most remarkable releases in what has already been an exceptional year.

It’s 1979 and teenager, Jamie (an appealing performance from relative newcomer, Lucas Jade Zuman) lives in a great big crumbling house in Santa Barbara with his eccentric mother, Dorothea (Annette Bening), a divorced woman who lives by her own quirky set of values. Fearing that Jamie might be missing a father’s touch, and after he fails t0 bond with live-in handyman William (Billy Crudup), Dorothea enlists the help of two young women to help her son broaden his horizons. Julie (Elle Fanning) is Jamie’s girl friend, a wayward spirit who sneaks into his room and shares his bed most nights but resolutely refuses to allow things to go any further, even though he clearly longs for more. She teaches him about friendship and the importance of looking good when you smoke a cigarette. Abbie (Greta Gerwig) is the artistic lodger who has recently survived a run in with cervical cancer and who is an absolute authority on clubbing, gender theory and the importance of speaking your mind. All three women submit powerful performances that linger in the mind long after the closing credits have rolled.

The story is presented as Jamie’s memories as he looks back on the events of 1979 from some unspecified point in the future and the resulting film, written and directed by Mike Mills, has a gorgeous elegiac feel, with Jamie’s occasional voiceovers commenting on what happened then and in some cases, what will happen to the lead characters later. The cinematography helps to reinforce this feel – it’s a series of shimmering images, brilliant, evocative, almost iridescent at times. I should also add that the script is very funny in places, though nobody would describe this as a comedy – it’s a lovely, life-affirming jewel of a picture, which I would urge you to see at your earliest opportunity, before it escapes the cinemas and heads for the small screens, where it will inevitably lose some of its mesmerising power.