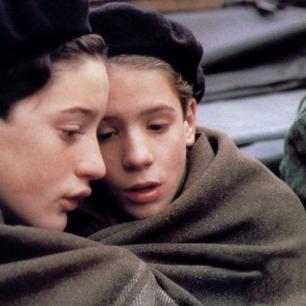 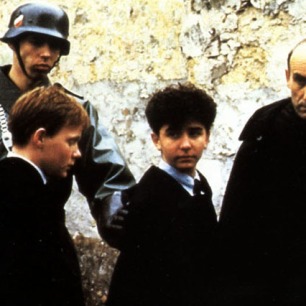 January 27th 2017 is Holocaust Memorial Day – and as a thematic tie-in with this important occasion, the Cameo Cinema, Edinburgh arranged a showing of Louis Malle’s 1987 film, Au Revoir Les Enfants. This moving, semi-autobiographical story is a powerful yet unsensational reminder of the horrors of the German occupation of France.

It’s 1944 and, with Paris under constant bombardment by allied planes, young Julien Quentin (Gaspard Manesse) is sent to a boarding school in the French countryside. Run by a society of monks (or ‘Monkeys’, as the boys prefer to call them), the school is a retreat from the realities of the real world. But one day, a new student arrives at the school. Jean Bonnet (Raphael Fejto) seems to receive preferential treatment from the monks. something which makes him a target to the more established children. He is, it turns out,  a talented musician and is addicted to reading fiction. At first he and Julien are adversaries but as Julien begins to learn more about the new arrival, so a deepening friendship develops. But it is a friendship that is doomed from the very beginning. Julien discovers that Jean is really called Jean Finkelstein – and that the monks are hiding him from their German occupiers. As the Nazis begin to exert an increasingly powerful grip on France, it’s only a matter of time before the truth reaches the attention of others…

Malle’s film is a little marvel – frank, unflinching but never overstated, it looks at the subject of the persecution of the Jewish race through the eyes of childhood and exposes it for the shameless horror that it really is. It also highlights the bravery of those who try to help their Jewish neighbours. There are affecting performances from the two young leads and the film’s searing conclusion will have you thinking about it long after the  credits have rolled.

The showing was followed by a short talk from Henry Wuga, a 91 year old German Jew who travelled to Glasgow in 1938, courtesy of the Kindertransport initiative and who has subsequently devoted his life to talking about his experiences as a refugee (a subject which really could not be more prescient in these troubled times). Henry is a fascinating man, who seems to possess an energy that belies his years – if you get the chance to hear him speak, I strongly recommend that you take it up. There are many who will tell you that the kind of events depicted in Au Revoir Les Enfants belong firmly in the past; but there are others (myself included) who look at what’s happening in the world right now and tremble to think that unless people wake up to the truth, they could all too easily be allowed to happen again. To find out how you can play your part in ‘learning lessons from the past,’ visit hmd.org.uk, phone 0207785 7029 or email enquiries@hmd.org.uk

And, if you can arrange it, watch the film, which is readily available on DVD and through streaming services.