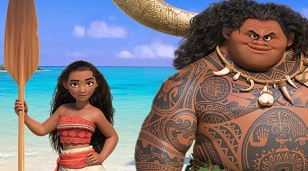 Moana is the name of a young Polynesian girl, the daughter and heir of a chief. Her father wants her to take his place one day, and can’t bear the idea of her leaving Motonui, their beautiful island. But Moana is fixated on the ocean and what lies over the horizon, and it seems her destiny lies elsewhere. All becomes clear when her grandmother explains that Moana has been chosen by the ocean to find the demigod Maui and help him return the goddess Te Fiti’s heart, which he had stolen a millennium before. Moana sets sail, and so the adventure begins.

It’s a wonderfully animated film, with some absolutely gorgeous seascapes in particular. Te Fiti is also beautifully rendered, her transition from goddess to island a delight to see. And the story is engaging, especially once Moana tracks down Maui and their odd-couple interplay begins.

The music works well as a soundtrack, and never feels wrong, but neither is it especially memorable; none of the songs sound like they’d have a life outside the film. And some of the tropes feel a little too well-worn: comedy animal side-kick? Check. Contemporary Americanised dialogue? Check. Cheesy final message: just be yourself? Yawn. Check.

Still, overall this is a very watchable movie, and certainly one that will entertain the kids. Is it up there with the best Disney animations? Not really.