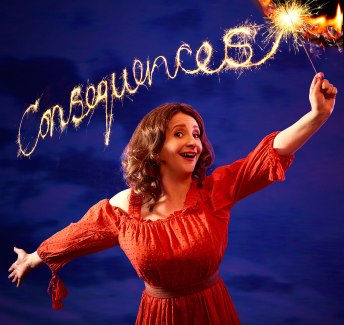 Lucy Porter’s Consequences is a slyly clever show. We’re beguiled in the first half by her friendly, chatty persona; it’s a conversational, observational three-quarters of an hour, consistently funny but never challenging, focusing on ageing, class status, and suburban family life. There are chocolates and there is port, given liberally to audience members who respond to her questions. There are some gentle comparisons between young and old (Philip is called upon to represent the old, but he’s not very good at it: he doesn’t  – it transpires – even know what an A road is). There’s wit and warmth, and it’s easy to enjoy. And then there is the second half. And that’s very different.

Because the second half interrogates all that we have heard before. The consequences, so to speak. The acknowledgement that sixteen-year-old Lucy would likely launch a blistering attack on her forty-three-year-old future self, for selling out and not living up to all of her ideals. And then an endearingly honest self-examination: what does current Lucy think she needs to change? Her attitude to trans rights, for example, is analysed and found wanting, so she educates herself, talks to people who know more: older Lucy still wants to get it right, is still prepared to learn. Oh yeah, and she’s still funny. And charming. And far more demanding than that first half led us to believe. It’s a neat conceit, and beautifully done.