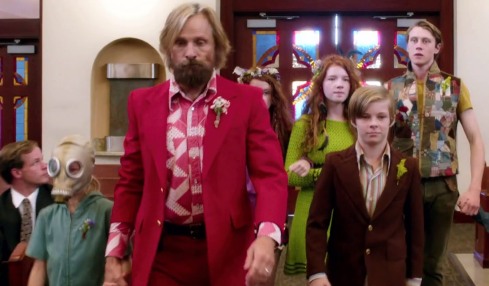 The ‘Captain’ of the title is Ben (Viggo Mortenson) a former hippie who now lives off grid in the wilds of North America with his six children. There, he drills them in a hard and uncompromising lifestyle, equal parts physical exercise, reading quality literature and discussing philosophy. Living in homemade tipis, the kids hunt deer, make music and wait for their mother to return from the hospital. She’s been there for several months, suffering from a bipolar disorder.

But then some terrible news arrives. She isn’t coming back. In the grip of depression, she has committed suicide. Of course, there must be a funeral, so Ben loads the kids onto his trusty bus, “Steve”, and heads for civilization. But what will Ben’s kids make of the ‘real’ world? How will they ever interact with kids whose idea of ‘the wild’ is based entirely on what they’ve seen in violent  video games.

This is an appealing, engaging film, wittily scripted by writer/director Matt Ross, and Viggo Mortenson excels in the lead role. Much of the humour here comes from the culture-clash between Ben’s feral offspring and the more sedate family members they encounter who cannot grasp what Ben has been doing with them. His major adversary is his father-in-law, Jack (Frank Langella) who clearly thinks he’s a prize asshole – which to some degree, he probably is, refusing to compromise on any of his dearly-held beliefs, even when he discovers that his eldest boy, Bo (a delightful performance from George MacKay), secretly longs to go to university, where he can experience something that he hasn’t merely read about in books.

If there’s a criticism, it’s that the family’s wild lifestyle is perhaps too romanticised. Occasionally, their day-to-day existence resembles an improbable Eden, where the worst thing they can encounter is scratching themselves on a rock. But that’s a minor niggle – on the whole, this is hugely entertaining from start to finish. It’s probably worth the price of admission, just for the scene where Bo plights his troth to a teenage girl he meets on a campsite, working from ideas he’s encountered in classic fiction, while Ben’s oration at his late wife’s funeral is another toe-curling highlight.

Catch this before it escapes back into the wilds.