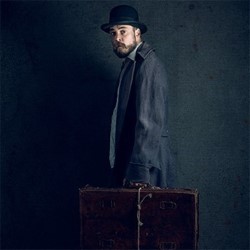 As soon as we take our seats in the wonderfully quirky Ominitorium, it’s clear that we’re in for some old-school clowning. Performer/director Henry Maynard takes an empty seat and sits among us as if waiting for the show to start. Half dressed and wearing a red fez, he proceeds to make us laugh without uttering one intelligible word – a series of grunts and gestures does the job as eloquently as words might.

Eventually, he’s up on stage rooting through a tattered trunk of props, each of which he uses to tell a little story. It’s hard to review an act like this. Too much description would give away the game and what this set is all about is a series of delightful surprises – but I will say that the highlight for me is a routine he enacts using nothing other than a white shirt, which he manages to turn into something surreal and magical.

There’s lots of audience interaction in this show. People are pulled up onto the stage and made to perform alongside the clown, but don’t let that worry you. This is gentle and charming stuff and all those who are invited to perform leave the stage looking very pleased with themselves. If you’ve a liking for a mixture of physical comedy, mime and puppetry, this is surely the show for you.