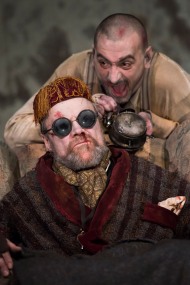 Endgame is a bleak play – by any standards. “The end is in the beginning – and yet you go on,” says Hamm, with a fatalistic, morbid acceptance of his looming demise. The script is deft, funny and thought-provoking – of course it is; it’s Beckett; his place in the theatrical canon is patently deserved – and the acting and direction here are pretty top-notch too.

Let’s deal with the elephants in the auditorium: Roy Cropper and Peter Barlow. It’s true – actors David Neilson and Chris Gascoyne are both well-known for their parts in Coronation Street. And it’s a fame that the promoters have been keen to exploit: on the publicity posters for this play, the men are instantly identifiable as their TV counterparts; on stage, however, they are barely recognizable. I’ve never really understood why people are confounded by an actor’s ability to perform a different role; it’s kind of in the job description, isn’t it? And these two are very good indeed.

If anything, it’s Beckett who feels over-familiar, not the actors performing him. The audacity of his ideas has been diluted – by time as well as exposure. And yet this production is still well worth seeing: it’s a masterclass in precision and control. Chris Gascoyne’s Clov is a perfect clown, a physical embodiment of futility and despair. There is humour here too, in the repeated movements and the spiteful asides, and comic timing of the very best. David Neilson is equally skillful: his Hamm is a raging, wasted, tragedy of a man, whose cruelty is wrought from desperation; I felt a glimmer of sympathy for Hamm tonight, and I never have before. Peter Kelly and Barbara Rafferty (as Nagg and Nell) give strong performances too; indeed, the saddest moment in the play is theirs, I think: roused briefly from the dustbins where they are living out their final years, they reminisce, recalling the April afternoon they went out rowing on Lake Como. “We had got engaged the day before!” “You were in such fits that we capsized.” The dreadful contrast between this happy memory and their current circumstances encapsulates the agony that underpins Endgame. They are us, aren’t they? And still we go on.

Please note this superb show is now showing at the Old Vic theatre in London. Tickets can be booked here.