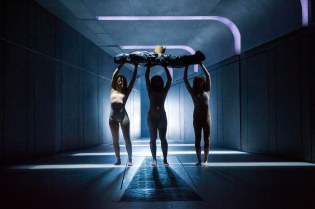 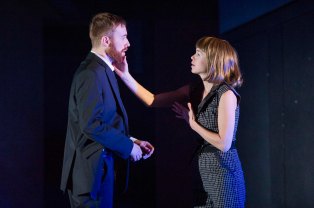 OK, so it’s yet another Shakespeare adaptation. And it’s Macbeth too – one of my favourites, but certainly not one that’s under-performed. Its length and relative simplicity make it a school curriculum staple, so regular airings are always assured: it’s an easy one to sell out.

But it’s this ubiquity that means it’s in danger of being – dare I say it? -boring. I’ve watched and read this play so often that, unless the director is bringing a fresh eye to it, I really don’t want to see it again. Especially after the recent much-acclaimed-but-actually-rather-dull film version, by Justin Kerzel (see previous review).

Luckily, Carrie Cracknell and Lucy Guerin’s production (for Home, Young Vic and Birmingham Rep) certainly brings that fresh eye. It’s not perfect by any means – there are a few jarring moments, and some lines that seem misjudged (that long pause between ‘hold’ and ‘enough’, for example, turning the latter into capitulation instead of a defiant battle cry), but it’s dirty and dangerous, just like it needs to be – and it’s sharp and witty  too.

It’s set in a version of the present, in a stark underpass, as grim as night. There are flickering fluorescent lights, and a sense of menace prevails. The body count is high, and murder is rife; the corpses are wrapped in plastic and tossed aside quite casually. This is certainly a brutal world.

The banquet scene is nicely done; Lady Macbeth’s madness is also a high point. It’s a strong production: daring and innovative and certainly not dull.

Highly recommended – although I suspect it will divide opinion.