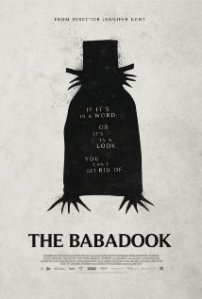 Fright movies come in different styles and formats but usually they have just one thing in common; they’re not really about anything much. People get shredded by murderers or pursued by ghosts, usually for no reason at all. This Australian creep-fest from writer director Jennifer Kent breaks the mould. It’s essentially an allegory about loss, grief and depression but in its own way, it’s even scarier than its American cousins.

Single Mum, Amelia (Essie Davis) is struggling to bring up her young son, Samuel (Noah Wiseman) after the death of her husband Robbie some years ago. The fact that Robbie was driving Amelia to the hospital to give birth to Samuel when he died hasn’t helped matters one little bit and added to that is the fact that Samuel is a bit of handful to say the least, addicted to performing magical tricks and frightened about the monsters that supposedly live under his bed. One night, Amelia reads to Samuel from a storybook he has found on the shelf in his bedroom, a nightmarish pop-up book entitled The Babadook, which they have never seen before. It isn’t long before mysterious things are going bump in the night…

Like all the best fright movies, the Babadook gets a lot of mileage out of very little. The creature of the title is barely more than glimpsed and there’s always the suspicion that it might just be a figment of Amelia’s imagination. The film is also boosted by two superb central performances. Essie Davis is totally convincing as a woman pushed to the very edge of madness and her gradual disintegration through the film is a wonder to behold. Meanwhile, young Noah Wiseman is terrific in the difficult role of a hyperactive (and initially not very likeable) kid.

It’s interesting to note that the film started as a short and that Kent crowd funded it on Kickstarter in order to get the budget to produce a full-length version. It’s a powerful and at times, genuinely nerve shredding debut and it will be interesting to see what this director does next. Meantime, those of a nervous disposition may want to stay away from this one. Because you can’t get rid of the Babadook.