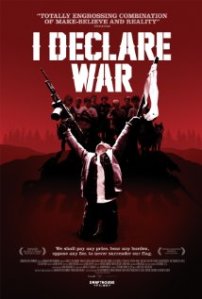 It’s the summer holidays and deep in the woods, two teams of kids are engaged in an elaborate war game, the object being for one team to capture the other’s flag. They are armed only with sticks and catapults but their own imaginations turn their homemade weapons into state-of-the-art military hardware – and as the lines between reality and fantasy become ever more blurred, so the stakes are raised and allegiances shift back and forth, testing friendships to the limit. One team is led by the undefeated P.K. (Gage Munro) while on the other side, the decidedly unpleasant Skinner (Michael Friend) has launched a mutiny to take over the leadership. Meanwhile, the solitary female in the game, Jessica (McKenzie Munro) seems to be playing to her own set of rules…

This is a solid effort from directors Jason Lapeyre and Robert Wilson and its nicely acted by the ensemble cast of young actors, with hardly a false note throughout. There are perhaps some over-familiar nods to Lord of the Flies, but the film is never less than entertaining and suggests that the directors may have earned themselves a bigger budget for their next offering.