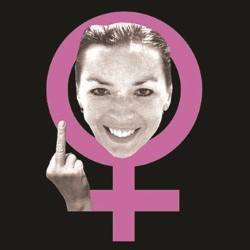 Bridget Christie arrives at Ed Fest 2014 with a huge weight of expectation balanced on her shoulders. Last year, her show was voted the overall ‘Best Comedy’ and as she herself wryly acknowledges, few critics thought that a series of routines based around the subject of feminism would be able to fuel a SECOND hour! Well, the naysayers can take an early both because Christie’s nervy, effervescent performance demonstrates that she is total control of her material. Expertly walking a tightrope between laugh-out-loud funny and genuinely thought-provoking, she brings a whole series of topics to the party – FGM, rape, the exploitation of women in advertising – and knows exactly how to bring her audience back from the edge of disaster with a perfectly timed quip. An extended routine about a Mueller Yoghurt commercial is just one of many highlights in this triumphant performance. As with any preview show, there were a few small issues with timing and continuity but make no mistake, if you are at the festival this year, here is one show you simply mustn’t miss.